You can find our latest posts on this page. Click on the calendar to review postings from prior periods and remember to check back here often!

No posts are available

The Martin Family has been serving the Montclair community, as well as the greater Essex County area, over 60 years, offering “Quality with Dignity.” Robert B. Martin, Funeral Director, along with his wife Lilian L. Martin established Martin’s Home For Service in October 1952. Robert Charles Martin continued the leadership and dedication in the family tradition of serving the community at large with pride until his passing in 2015. His wife Richelle Williams has continued the tradition set forth by the Martin Family. Our personal service caters to the needs of families of all faiths. We assist families in planning traditional services, memorial services, cremation, pre-arrangement planning, transportation and receiving a loved one by land or air for burial and military services. Our goal is to serve families professionally with as little stress as possible by paying attention to funeral details, and sensitively tending to your loved one, one family at a time. We are committed to making your experience as comfortable as possible, all with “ Quality with Dignity.” 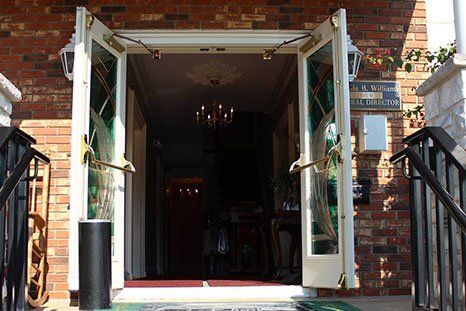 Robert B. Martin and Lilian L Martin established Martin’s Home for Service, 1950, Offering “ Quality with Dignity” to the community at large. Robert B. Martin passed in 1994. His wife and their son Robert C. Martin carried on his legacy until Lilian’s passing in 2007. Robert C. Martin continued to serve the entire community, paying special attention to the details until his passing in 2015.

Robert Charles Martin served his apprenticeship at Martin’s Home for Service from 1963 through 1965. He attended Queens College in New York for business and was a graduate of McAllister School of Embalming in New York for Mortuary Sciences. He also attended NIT in Maryland for internal combustion engines. Mr. Martin left the funeral home in 1976 to pursue a career as a hair chemist in addition to doing platform work for Revlon. He then owned several hair salons up and down the eastern seaboard. Mr. Martin returned to run Martin’s Home for Service in 1986 when his father took ill.

Mr. Martin was a real estate investor and owner, however, he sold all of the salons and dedicated himself full-time to the funeral home upon his father’s death. Mr. Martin was a member of the National Funeral Director Association and the American Society of Notaries. The second generation in the family business, he continued to serve the whole community with pride and respect. He passionately helped youth by teaching them how to build motorcycles, how to become funeral directors or just mentoring them in today’s world, until his passing in October, 2015.

Thomas C. Brown was a licensed funeral director, a graduate of Eckles College of Mortuary Science, Temple University (Mortuary Science), Rutgers University (Business) and Atlantic School of Insurance. Mr. Brown was with Martin’s home for Service from1977, until his passing in June, 2016. He was certified in OSHA training, Mass Casualty training and Organ Donor/Eye Enunciator. Mr. Brown also had experience with Arlington National Cemetery. He was a member of the National Funeral Directors Association, Epsilon NU Delta Fraternity, Inc., American Society of Notaries, American Legion Post 251- Montclair, NJ and was a United States Army Veteran.

A year of daily grief support

Our support in your time of need does not end after the funeral services.  Enter your email below to receive a grief support message from us each day for a year.  You can unsubscribe at any time.